Share
News Alert! As expected, Department of Labor new rule is being challenged in the Federal Court. ITServe Alliance has filed a law suit against Department of Labor in New Jersey. ITServe Alliance has successfully challenged USCIS in the past and IT services companies has benefited tremendously from that in getting H1B approvals for 3 years.
DHS (Department of Homeland Security) announced an Interim Final Rule (IFR) titled “Strengthening the H-1B Nonimmigrant Visa Classification Program” on October 8, 2020, with the intent to amend regulations around the H-1B visas. The proposed changes include modifying the definition of Specialty occupation and adding definitions for worksite & third-party worksite, interpretation of employer-employee relationship, duration of H1B approvals and site visits. These changes have far reaching implications to H1-B visa holders as well as H-1B petitioners including IT consulting services companies. The proposed DHS new rule on H1B will be effective from sixty days of publication of the rule.This rule is applicable only to new petitions including extensions, transfers & amendments and shall not apply to existing applications pending with USCIS or already approved petitions.

DOL (Department of Labor) also has announced Interim Final Rule (IFR) titled “Strengthening Wage Protections for the Temporary and Permanent Employment of Certain Aliens in the United States”, which has changed how prevailing wages for the H-1B, H-1B1 and E-3 jobs are calculated. The proposed DOL new rule will be effective immediately from October 8, 2020. 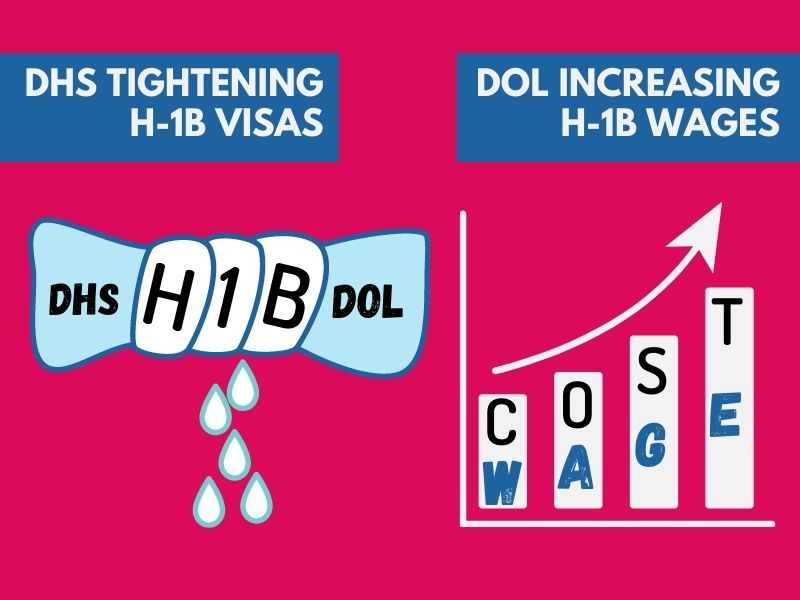 COVID-19 economic impact has been used as a trigger for both of these announcements. In this article we will provide a comprehensive description of the proposed changes and their potential impact to both H1B Visa holders and H1B petitioners. Finally we will provide our predictions on what could happen next.

DOL’s proposed rules are changing the way prevailing wage levels are calculated and that is resulting in significantly high prevailing wages for all occupations. Specifically, the following chart shows how the percentiles have been increased for computing the wages for each level.


At first glance, it looks like good news for H1b employees as this would increase their wages. For the H-1B petitioners it's a steep increase in costs and could potentially reduce the appetite for hiring H-1B employees. The H-1B employees need to be careful as it is a double edge situation, in which the H-1B jobs could disappear as the appeal around H-1B jobs decreases considerably, which could potentially force them to leave the country. F-1 Visa holders on OPT or STEM-OPT who are fresh out of college may find it difficult to find an employer who can sponsor their H-1B visa with higher prevailing wages.

DHS is amending “Specialty Occupation” Definition to clarify that there must be a direct relationship between the required degree field(s) and the duties of the position. Also, the amended definition clarifies that a position would not qualify as a specialty occupation if attainment of a general degree, without further specialization, is sufficient to qualify for the position.
Under the new DHS rule on h1b, the petitioner will have the burden of demonstrating that there is a direct relationship between the required degree in a specific specialty and the duties of the position. So this will be a challenge for persons with non Computer Science Engineering degrees applying for Software Engineering related Jobs.

USCIS has issued several Request For Evidence (RFEs) on the 'Employer-Employee relationship' in the past. In the new DHS rule it is further tightening the regulations around this topic.

DHS is removing the phrase “as indicated by the fact that it may hire, pay, fire, supervise, or otherwise control the work of any such employee” from “United States employer,” definition and replace that phrase with a separate, more extensive definition based on “conventional master-servant relationship” in accordance with common law.

Also right to control is one of many factors USCIS will consider and the employer-employee relationship will be determined based on the "totality of the circumstances" including factors like “whether the petitioner has the right to control the beneficiary on a day-to-day basis”, “who is providing the tools necessary to perform the job”, salary, hiring, firing, benefits, etc.

C. Corroborating Evidence of Work in a Specialty Occupation

USCIS requires that at the time of filing an H-1B petition, the petitioner must have specialty occupation work for the beneficiary at the intended date of employment. Furthermore, USCIS can request copies of contracts, work orders etc as corroborating evidence. The new DHS rule on H1B enforces that "speculative employment" is not permitted in the H-1B program.

H-1B petitions for third party worksites will be given a maximum of 1 year validity period. While DHS considers that Third-party placements is a valid business model, it is pushing for stricter regulations around it to ensure eligibility and compliance. Furthermore DHS claims that most of the work orders filed with the H-1B petitions for third-party work-sites, have a validity period of 6 to 12 months and DHS is using it as a basis for 1 year maximum validity approvals.

This "DHS new h1b rule" unnecessarily increases the cost for H1-B petitioners who have work orders that could span more than a year, as they would get approvals for 1 year only if the beneficiary works at a third party client location. In addition to that it may increase the anxiety in the H-1B visa holders as they continuously need to get their visas extended and uncertainty around the H-1B visas.

H1B beneficiaries working at their employer’s location can continue to get their approvals for 3 years.

The new DHS H1B rule amends the regulations to require issuance of a written explanation when H1B is approved for a shorter period than what was requested in the petition. DHS claims that it will help H1B petitioners to understand the reasons behind the limited approval.

In this proposed change, DHS has clarified its authority and scope of inspections, in particular, "on-site inspections". USCIS has found in its review in 2008 that in 20% percent of the cases it sampled, there were misstatements related to job locations, wages paid, and duties performed. Following that USCIS FDNS started doing unannounced site inspections to verify the information in certain h1b visa petitions. The data from FDNS revealed that in 12% percent of the petitions they reviewed (FY 2013-2016), they found non-compliance towards the H-1B program. DHS claims site visits are important to maintain H1-B program integrity and to detect and deter the fraud and noncompliance around the H-1B program.

With the new rule, USCIS can inspect petitioner offices as well as where the beneficiary works including "third-party worksites". If USCIS is unable to verify the facts related to H-1B petition or compliance towards the H-1B program requirements, those could be "grounds for denial or revocation" of a H-1B petition.

DHS stance on third party worksites is that since the third party is benefiting from the H1-B beneficiary services, they should cooperate with them on the site inspections. If a third-party worksite refuses a site inspection, they shouldn’t benefit from the services performed by H-1B beneficiary. Third-party client locations will need to comply with DHS’s new h1b rule to utilize H1B contractors for services.

It is expected that the rule will come under litigation very quickly. In anticipation of that DHS carefully drafted the changes in such a way that if a court invalidates part of the rules, the other rules will still be intact. An invalidation of one or more changes, will not invalidate all the proposed changes.

It is highly questionable that the proposed changes will help the US Economy and persons during the COVID-19 economic crisis. DHS should remember that H1B visa workers contributed significantly to the US economy through innovation and by paying state and federal taxes. It is an unfortunate move by the current administration to undermine the role of H1Bs to the US economy.

Following are the list of questions answered in this FAQ.
1. When does the new DOL rule on H1B become effective?
DOL new rule on H1B is effective immediately starting from October 8, 2020
2. Does the DOL new H1B rule impact pending or approved LCAs or PERM Labor certifications?
No. DOL H1B new rule  doesn’t impact the existing or pending LCA or PERM labor certifications.
3. Does the new DOL H1B rule impact the pending Prevailing Wage Determinations(PWDs)?
Yes. The rule doesn’t apply to approved PWDs.
4. When does the new DHS H1B rule become effective?
The rule was announced on October 8, 2020. The new rule will be effective 60 days from the date of announcement.
5. Does the DHS new rule on H1B impact pending or approved H-1B applications?
USCIS will not go back retroactively for the pending or approved petitions.
6. Does the DHS new H1B rule apply to H-1B extensions, amendments and transfers?
Yes, the new DHS rule will apply to H1B extensions, amendments and transfers.
7. What is the maximum approval period of H1B petitions for employees working at third party worksites under the New DHS H1B rule?
1 year.
8. What is the maximum approval period for H1B petitions for employees working at employer locations with the DHS new H1B rule?
3 years.
9. Can USCIS give approval for shorter periods than requested?
Yes. If they give approval for a shorter duration, they will need to explain the reasons behind that to the h1b petitioner.
10. Is the new DHS rule on H1B applicable to approved H1B petitions with approved I-140s?
Yes. 3 years duration for work at employer locations and 1 year for work at third party worksites, when a h1b petition is filed for transfers, extensions and amendments.
11. What is the effect of shorter validity periods on H4 and H4-EAD?
Since H4 and "H4 EAD" are tied to the H1Bs, H4 petitions applied with H1 petitions will receive similar validity periods as H1B petitions.
We accept legal insurance plans and are in-network provider for many well known legal insurance companies

Disclaimer: The information on this website is for general information purposes only and should NOT be taken as a legal advice. The use of this website does NOT establish an attorney-client relationship.
Confidential information should NOT be sent via forms on the website.
Immigration Law | Estate Planning Law
© 2016-2022 Kamala Law Corporation
2670 S. White Rd Ste 105, San Jose, CA 95148